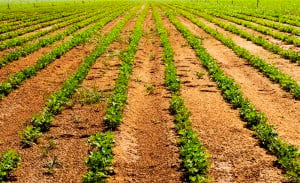 As farms get larger, and the concern over nitrates in the water supply grows, the regulations surrounding manure applications are becoming more restrictive.

Mark Webb, a dairy farmer in Idaho, runs a 1,800 cow dairy. Like many large animal operations, Mark's dairy is subject to state nutrient regulation that dictates how much manure and dairy waste he is allowed to apply to his fields annually. “We have to report all of our manure that goes onto the field and along with that you have to do soil testing to make sure you stay within the guidelines which are 40 parts per million (ppm) of nitrogen on the field,” he explained.

Because there is a limit to how much manure he can apply to any one field, these regulations are costly for Webb. He had a lot of time and capitol tied up in transporting and spreading manure, in an increasingly large radius surrounding his dairy. But that was before he discovered composting. By creating an on-farm composting program Webb found a solution to efficiently deal with his manure without exceeding the nitrate limits set by his nutrient management plan.

Composting relies on microorganisms, aeration, and proper moisture management to break down waste materials, like manure, and transform them into a rich, crumbly, soil-like substance. The nitrates and ammonia in good compost are stabilized and nutrients are slowly released into the soil over time. This is in contrast to raw manure which quickly releases potent amounts of nitrates that give Mark high test numbers.

Composting also reduces the total volume of the manure and dairy waste that Webb has to spread by one-third. “When it's just wet manure you're hauling 15 ton. With compost you're hauling 10 ton,” he said. This significantly reduces the acreage he needs to set aside to receive all his manure. It also means Mark can reduce his hauling expenses by one-third! This represents significant savings for his large operation which generates thousands of tons of manure annually.

In addition to reducing his transportation bill, Mark explained that having significantly less volume means that he can use smaller vehicles for hauling his compost. All of this means that it is cost effective for Mark to take his compost further than what he used to when he spread raw manure. With raw manure, “...we were always trying to keep it a little closer, because of the manure being heavy like it is. (Now) we're able to spread it out further, rather than trying to concentrate it into one area.” This is a big advantage for Webb who farms a total of 4,000 acres.

And his soil tests? Webb reports that he can apply much more compost than he ever could raw manure and dairy waste. Even with larger volumes of compost, his nitrogen levels easily stay within the 40 ppm range.

Compost or raw manure, either way the nutrients from the manure are still on the field, Mark said. But when they're in a dry composted form they spread like fertilizer and are much more even over the entire field. “And when you do it the other way there's just clumps of stuff out there and when you test you might just get a clump,” he explained. Having the compost spread more evenly, like “granular fertilizer,” helps ensure that the nutrients are more evenly distributed so tests are not taken from a manure-saturated patch of soil. “That helps a lot,” Mark said.

Already Mark has noticed other benefits from his compost applications beyond keeping low nitrate levels in his soil. For example, the even particle size also helps ensure even germination and growth of his field crops.

Mark's compost program has helped him deal with the restrictions of his nutrient management plan, and efficiently dispose of his dairy waste, both manure and bedding. Composting has also brought considerable savings and has taken manure beyond something to be disposed of, to something that Webb views as an asset to his fertilizer program. Mark adds that his Aeromaster compost turner has been instrumental in helping him achieve these benefits. It literally out-turned the competition in terms of speed, efficiency and cost savings. In review:

How are nutrient regulations impacting farming practices in your area? How much nitrogen-rich agricultural waste do you need to process every year? If you have questions about how a composting program can be implemented on your farm, feel free to ask below.