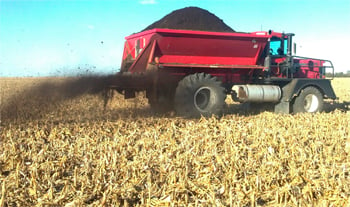 To try and solve this problem Webb piled all of his dairy waste at the edges of his fields to allow it to break down “naturally.” This approach yielded better results than the raw manure applications, but Webb still wasn't satisfied with the crops grown in his manured fields. One major problem caused by the manure was poor germination and weak stand establishment.

When Mark spread manure on his fields he was inevitably left with clumps that never got incorporated into the soil, even after being tilled. “Even though you plow it under, there's a lot of clumps. And everywhere a seed drops into one of those clumps, it doesn't grow. It's just too potent,” he said. One patchy field may be bearable, but when you multiply that number across Webb's 4,000 acres, the loss adds up quickly.

This inconsistency couldn't be solved by using tillage alone, because the manure and spent bedding was not well-mixed or uniform when it was loaded onto Mark's spreader trucks. Some trucks were heavier and had more manure than others, meaning that each field got a different amount of manure. “It was just so uneven,” Mark said.

Mark wondered if making compost out of his manure by using a professional compost turner might be the answer to fixing the inconsistencies in his fields. After searching for an efficient turner, Mark found Midwest Bio Systems’ Aeromaster compost turner, and he's been thrilled with the speed and efficiency of the machine. Now he's able to process all his annual dairy waste, something he was never able to do before. And he's turning that waste into a valuable fertilizer asset that is already improving the condition of his soils.

In contrast to manure, Mark has found that compost incorporates very easily, leaving no clumps, and creating a smooth, uniform, and even seed bed. After tilling Mark drags a large “McFarlane” harrow across the field, once, and he's ready to plant. “It really smooths it all up. So you've got a good bed that's even, you haven't got all those clumps.” And this has given Webb the consistent and uniform germination he was looking for. “It's just so much better to have consistency in your fields,” he said.

In addition to creating an amendment that incorporates easily to make a fine seedbed, composting also stabilizes the ammonia in Webb's manure, helping his crops gain nutrients that would normally be lost if the manure was allowed to sit and age. In fact, some sources say that to get the maximum ammonia benefit from raw manure it should be incorporated within 24 hours of being spread. Compared to raw manure, compost is stable, it decomposes slower, and it releases its nutrients to crops slowly, and over the course of several months. It also doesn't burn Webb's crops like the raw manure did.

Another benefit for Webb is that compost has been shown to lower weed pressure associated with manure since all the weed seeds are destroyed by heat during the composting process. And as farmers know, low weed pressure is essential as a new crop is becoming established to give it time to grow large enough to compete.

His strategy of composting his dairy waste is helping Mark meet his goal of “maximizing his crops.” Within a year he will have covered most of his ground with compost and he's looking forward to seeing what benefits this soil amendment will bring to his farm in years to come.

There's another way Mark's cousin, Brent Webb, has been using his pull-type ACS turner and composting to help realize savings and a larger profit margin – as a tool to repeatedly recycle his dairy bedding. Stay tuned for more information in the next post.

Do you have a story you'd like to share about manure, or other farm wastes, causing problems in your fields? Do you have questions about how composting can help you that you'd like to raise for discussion?