Lots of cows, lots of manure.

Brent Webb farms 4,000 acres of crops, including corn, soybeans, sugar beets, and alfalfa. He also runs a 1,200 cow dairy along with his three brothers. Manure has always been on hand in large quantities, and Brent used to spread the nitrogen-rich manure liberally on his cropland to supplement his fertilizer needs. He has since discovered that these long-term manure applications were hurting his crops and his soil.

Alfalfa is even more challenging to fertilize with manure. Because of the rough structure of the raw dairy waste, Brent could only spread manure before he planted his alfalfa, meaning he was dependent on commercial fertilizers for the duration of the crop's four-year lifespan.  “We used to not put any (manure) on alfalfa because it had a lot of straw and stuff in it and it wasn't broke down, and we needed to get it in the ground in order for it to break down,” and get a fertilizer effect, he explained. Weeds in the manure were also an issue.

When Webb purchased an Aeromaster pull-type compost turner, he found a way to efficiently process his manure and dairy waste and transform it into a nutrient-rich high-quality compost. His goal is to create “the perfect compost” to replace all of his commercial fertilizer needs. The switch to compost has been particularly beneficial for Webb's alfalfa crop and it has enhanced his fertilizing options in several important ways. 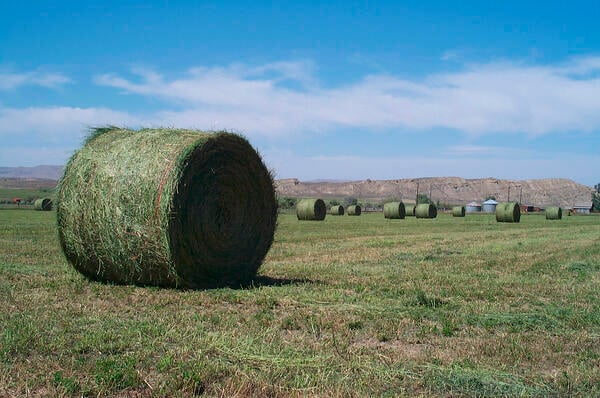 The first step in establishing a thick, lush, alfalfa crop is proper seed bed preparation. Because of its small particle size, compost helps to create a fine-textured seed-bed as opposed to the “clumps” left after a manure application.

The heat of the composting process also eliminates all of the weed seeds that are normally present in manure. Brent's cousin Mark Webb also bought an Aeromaster pull-type compost turner in 2011 to process manure on his 1,800 cow dairy. Although he has only been composting for about one year-and-a-half, he has already noticed fewer weeds in his fields than when he spread raw or partially-decomposed manure. Heavy weed pressure causes the health and productivity of an alfalfa stand to decline quickly, so keeping an alfalfa planting clean of weeds is important to maintain the long-term productivity of the crop.

Alfalfa requires large amounts of phosphorus and potassium to grow and produce well throughout its lifespan. According to researchers at Purdue University, adding P and K will help alfalfa stands last longer than if they weren't receiving these two macro-nutrients, cutting down the expensive costs of re-establishing a stand of alfalfa. P and K levels are high in compost, and compost is much more nutrient-dense than raw manure, meaning that five tons of compost to the acre will produce the same effect as 20-30 tons of manure.

Proper levels of P and K are also important for maintaining plant health. Plants deprived of these essential nutrients will be unbalanced, and susceptible to changes in weather conditions, such as drought, and attacks from pests and diseases.

Because Alfalfa roots are active in the first 2-4 inches of soil, compost applications directly on top of the growing crop also get the nutrients right where the plant needs them.

In addition to supplying high levels of P and K, the nitrogen in compost is stabilized. Nitrogen is a “strong” mineral, and if a plant is saturated in nitrogen it will take up more nitrogen than other nutrients, leading to an imbalance. Excess nitrates in hay lowers the relative feed value (RFV) of alfalfa and is not good for cow health. A high RFV is important for a cow's milk production, while a low RFV leads to inadequate nutrition, decreased health and lower milk production.

Alfalfa can regulate its own nitrogen needs by partnering with soil bacteria that form nodules on the roots of alfalfa plants when the soil is “alive” with biological, microbial, life. These bacteria fix nitrogen from the air and make it available to plants. Compost helps bring this life to the soil.

An endless supply of compost, the ability to fertilize all-year long.

Due to cost, there is a limit to the amount of commercial fertilizer Brent can afford to purchase for his alfalfa every year. Producing compost from his dairy waste gives him a nearly endless supply of on-farm fertilizer, which he can apply whenever he wants, in as large of a volume as he needs. The raw ingredient for his compost, his dairy waste, is free, and his only expense is the cost of producing the compost and then spreading it on his fields. Compost costs Webb less than three dollars per ton to produce. And he discovered that it cost him thirty percent less to transport and spread the compost than it did the raw manure!

Brent remembers that when he spread manure on his alfalfa, he was only able to fertilize before he planted. “But now we can fertilize it every year, as far as after it's planted,” he said. And for the first time he can spread his on-farm fertilizer right on top of his crop!

Brent is excited about the possibility of applying compost or compost tea after he makes a cut of hay to maintain high yields throughout the growing season. Another farmer who has been successfully using this approach is Steve Block, owner of a beef cow feedlot in Illinois, who makes compost from his feedlot waste, and sells this compost and his own extracted compost tea to other farmers. One alfalfa grower  is willing to haul the liquid tea over 60 miles so that he can spray it on his alfalfa fields after every cutting because of the tremendous increase he noticed in the growth and vigor of his plants.

A long-lived alfalfa stand is dependent on good management practices. This year Brent has seen record alfalfa yields. But was it due to his compost? He said that he likes to think so, but feels it is too soon to say since he has only been applying compost for one entire growing season. Farmers in Nebraska, however, have seen huge yield increase in yield from one year of high-quality compost applications.

There is another significant way that compost enhances alfalfa crops, by increasing the Relative Feed Value (RFV). While high quality compost may bring benefits, humus compost takes those benefits to the next level. In the next post read about how humus compost is helping a Pennsylvania farmer grow the best quality hay crop possible.

How much money are you spending on commercial fertilizer for your alfalfa crop per-acre? How many tons of agricultural waste do you process per-year? Could your dairy or feedlot waste become an instant solution to your fertilizer needs?