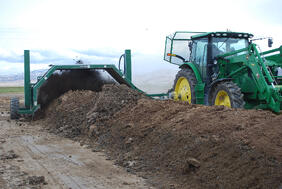 With rising feed and fertilizer costs and a fluctuating commodities market, 2012-2013 is shaping up to be a hard year for dairy farmers. Droughts in the Midwest have drastically increased feed prices, and forced some farmers to switch feeds, from corn to wheat. Fertilizer prices continue their upward price trend, making it difficult for dairies growing their own feed to be profitable. Yet two dairy farms in Idaho have found a way to reduce costs and become independent from buying fertilizers, by producing their own on the farm. And they're doing it through composting.

From “hauling” waste, to spreading fertilizer

Brent Webb, a co-owner of Webb Basin Dairy, jokes that the main reason he and his family are dairy farmers is because cows and a dairy “gives them a market for their (field) crops.” Webb, who farms 4,000 acres in Idaho, raises barley, corn, alfalfa, and sugar beets, in addition to operating a 1,200 cow dairy in partnership with his three brothers. Webb described how he likes the cyclic nature of a dairy farm: The crops feed the cows who produce milk, as well as manure, which is spread on the fields to help nourish the next generation of crops, which in-turn feeds the cows once again in a “endless cycle.” 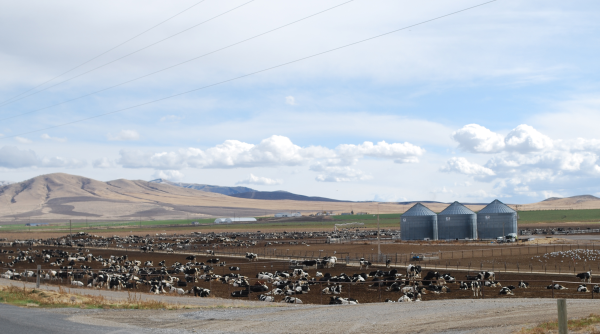 With 1,200 cows manure has always been on hand in large quantities, and the Webbs have always hauled it onto their fields to supplement their fertilizer needs. Over time Brent observed his manure applications having negative effects on the health of his crops. When he saw infrared images of his fields showing nutrition problems and soil compaction, he started seriously re-considering his raw manure applications.

Brent wondered if the process of composting, using microorganisms to break down his manure into a more plant-friendly form, could be the solution to the problem he faced, as well as a way to reduce his fertilizer costs.

This interest in creating high-quality compost led Webb to attend a Midwest Bio Systems' composting workshop in 2011 led by company founder and CEO Edwin Blosser. This workshop opened his eyes to the possibilities of using on-farm compost to replace his commercial fertilizer needs. In one example, Webb recalled, by applying one-half ton of humus compost annually, over an eight year period an Illinois farmer was able to completely eliminate his Phosphors and Potassium fertilizer applications.

Webb was impressed with this high-tech approach to composting and shortly after the workshop he bought an ACS pull-type compost turner and began using it right away to compost his manure and soiled dairy bedding. “We had the product, we had the ground, the fertilizer cost is going up every year. Why not make your own fertilizer and divert some of this fertilizer cost and then put it on every acre of ground?” he wondered.

A few days after his compost turner arrived, Brent invited his cousin Mark Webb, a neighboring dairy farmer, to see his new compost turner in action. “He (Mark) had been composting for just a couple of years and he was talking to me about how slow it (his compost turner) was. He could never cover all his compost material in a season because it (the old machine) was so slow,” Brent said. And Mark was certainly impressed with Brent's turner. “I saw what it could do and said, 'I need one of those,'” he laughed.

Within a year composting has changed the Webb’s operations in several significant ways:

In the next few posts we'll explore each of these points in detail to learn how the centuries-old practice of composting, combined with modern knowledge and cutting-edge technology, is helping dairy farms address some of the big challenges they face today.

Are you making the most of the waste from your dairy farm? Do you have questions about how compost can be applied to your operation? If so, ask below.