Brent Webb is not new to the experience of rising bedding costs. Webb used to bed his stalls with sawdust until the price of the material began to climb, making it too expensive to be economical. “We used to put a lot of sawdust in the freestalls, until they figured out that they can use their sawdust in making wafer boards, or whatever, and it costs more money. So then we went to putting straw in the freestalls.”

Straw worked well, but it was hard to keep it “groomed,” Brent said. And straw is not cheap, either! Brent began to look for alternatives, and he found that his on-farm compost program provided the solution.

“Most people with dairies they will put one of three or four things in it (stalls),” Brent explained. Sawdust, straw, and sand, are standards. But recently some dairy farmers have been using compost as a high quality bedding.

Using compost, which is sometimes compared to “dirt,” as a “clean” bedding may seem counter-intuitive, but Webb explained that the heat and aeration from the composting process actually kills the “bad” bacteria. “You don't want to have a bunch of bacteria and stuff, and compost has been cured, it doesn't have the bacteria that some of the other stuff has, that can cause mastitis,” he explained. 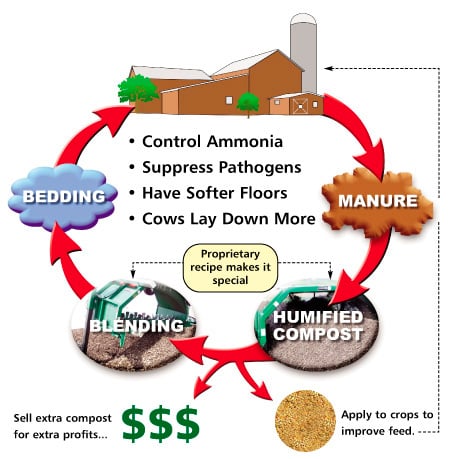 Mechanical compost turners are a combination of modern technology and knowledge about the science of composting. A well-constructed compost turner can create compost faster, and of a higher quality than waste that's allowed to slowly decompose in a large pile. Brent bought an Aeromaster compost turner, and he found that the machine overturned the competition. In two months Brent was able to recycle his spent bedding for a second use.

By using state of the art technology, the Aeromaster completely mixes and inverts the material in the compost windrow, adding air, moisture from water jets, and microbial inoculants to encourage the “good” bacteria that break down the material, crowd out the bad bacteria, and transform the spent bedding into a clean smelling soil-like substance.

Inoculating the compost with beneficial microbes is an important element of Midwest Bio Systems' “Advanced Composting System.” These “good” microbes help to break down the organic matter in the compost quickly, and they take over the space in the compost, leaving no room for the “bad” bacteria like e. coli to grow. According to experts at Cornell University, many of the bacteria that cause mastitis in cows come from dirty and soiled bedding, not from the cows themselves. By first heat-treating the dairy waste through the composting process, then inoculating it, Brent's composting creates the cleanest environment possible. The larger particle size of the compost also helps to prevent pathogen growth

Brent has noticed that his soft compost bedding causes less wear on his cows legs and hooves which helps to prevent lameness, one of the big losses for dairies that have concrete stalls.

Brent is also pleased with how quickly he's been able to recycle his dairy bedding using his compost turner. After 10 turns with the composter Brent has a finished compost which he can re-apply as bedding after mixing it with a little bit of straw to keep it “fibrous.” In the future, he's planning to experiment with making a compost that's not completely decomposed as his bedding. “I get greedy,” he said. “I look at my good compost rows, and they're just beautiful compost, and then what do we do with it? We bring it and put it in the freestalls. And I think, 'No! Don't take my good compost for freestalls! I want to put it on the fields!'” he laughed.

Brent has been extremely pleased with his current system of using his own compost for bedding. “I get a benefit,” he said, “It's recycling. We haul it into the freestalls, then we haul it out to the compost rows and we make it again!”  This recycling process can be repeated “endless times,” which saves Webb a considerable amount of bedding costs and helps him keep his dairy profitable in these tough economic times.

How much money would you save annually if you didn't have to buy dairy bedding? If you grow your own bedding, could recycling leave you with more left over to sell to other dairies? How has the cost of dairy bedding impacted your operation?