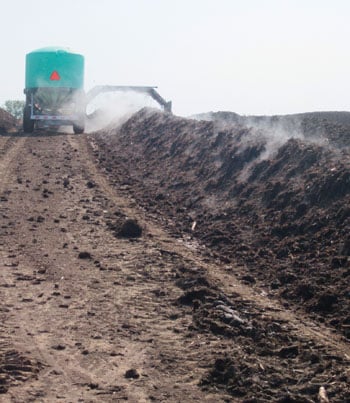 Scott describes himself as “fairly new” at composting. He knew little about composting until he attended a Midwest Bio Systems training class in the spring of 2011. Yet the first batch of compost that he produced in fall 2011 is definitely high quality. It tested at 25 pounds of nitrogen, and 38 pounds of calcium per ton. As Scott began spreading his compost on his land neighbors began to take notice. “I had a guy, I was originally going to do 40 acres for him, and then when he saw the product he asked me to do 200 for him!” Scott laughed.

All told, Scott created 2,000 tons of finished high quality compost that first fall. Even with all this compost, the instant demand for his product meant that he only had enough to cover 700 acres of his own cropland, at an application rate of one-to-two tons to the acre. News of his compost quickly spread by word of mouth, and in his first year he sold more than 400 tons of high quality compost produced from his feedlot waste. “And I guess I can say I've already got a small waiting list because if I had more made I probably could have sold another 500 acres worth,” he said.

When one of Midwest's representatives visited Block's farm to help him set up his turner, the representative joked with him that when he started selling compost he would want more manure. “..And he said you'll want to put up two more (barns) just to have the manure. And I kind of laughed at him. But as we stand here right now, if I had the money to put up two more I probably would just so I could get more manure and sell more compost,” he said.

From Waste to Gold

Scott is excited about the impact that compost sales could have on his farm's profitability. He now views his feedlot waste differently. “There's not much waste lying around my farm as maybe there was two years ago. Sometimes you get some old hay that you don't get baled right, and the cows might eat a little of it, but it maybe laid there and rotted. Now anything I've got that will break down ends up going in a windrow,” he laughed. “If I see a pile of something whether it's dirt, weeds, old hay, I'll find a way to get it out to my windrow because it's worth $80-$100 a ton eventually.”

The bulk of Scott's compost, the carbon, is made up of his soybean stubble and corn stalks that he uses as cow bedding. His primary nitrogen source is manure. “Our goal is to clean the barns every three months, four times a year,” he said. “I don't get too excited about what all goes in it (the compost). I'm trying to get rid of my cattle manure is what I'm trying to do. A lot of people put a lot of different things in. My recipe probably has only got three or four things in it,” he explained.

In the summer of 2012 Illinois was hit by the worst drought in recent history. Block's area of Illinois was hit by “severe drought,” and received no water, making it impossible for anything, even the weeds, to grow. This meant that it was hard for Scott to see the impact that compost had on his crop fertility plan, although he noted that he did see vigorous growth on young plants in the spring and it seemed to him that everything grew just as well as if he had used commercial fertilizer.

He also noticed that he harvested more forages this year, which he attributes to his compost. For example, an August planting of oats grown in a compost-amended field yielded significantly more forage than the other half of the field that had no compost. Scott could see that the plants in the field with compost were several inches taller, which adds up to significantly more tonnage over 75 acres.

In addition to the solid compost, Scott has also begun making extracted humus compost tea using humus compost and an Aeromaster Compost Tea Extraction System from Midwest Bio Systems. He also sold tea this year, and farmers in areas that got some more moisture that Scott saw exciting results

One farmer who became a tea customer began spraying the extracted tea on his alfalfa. “He probably lives 120 miles away, and he came down and we traded some beans for me for some tea (for him). He makes a lot of hay, and he was spraying (tea) after every crop and he couldn't believe the growth. His neighbors came to him and said, 'I don't know what you're putting on your hay ground but yours looks a lot different than mine!' He was able to sell all of his hay straight out of the field to a  dairy. He said that he had some really good test results on it. He's definitely sold on it,” Scott said, adding that this farmer is considering buying a tea extractor of his own so that he doesn't have to transport the liquid over such a long distance.

In another example of extracted tea being an effective fertilizer, a Pennsylvania farmer who used extracted humus tea has also raised the relative feed value of his alfalfa, and high quality compost made from feedlot waste helped farmers in Nebraska increase their alfalfa yields, explaining why Block's customers saw such a huge impact.

On another farm Block offered to give some tea to the farmer for free if he would allow him to do a test in one of his fields where they sprayed half of the field with tea, and half without. “His beans yielded 7 bushels to the acre more where we sprayed tea from where we didn't,” Scott said.

Scott is excited about the future of his composting business. Composting has eliminated waste management issues on his farm, and has allowed him to turn his waste into an asset and profit from yet one more cow product.

“I do a lot of custom feeding in my feedlot, I don't own all the cattle,” Scott explained. “I get paid to feed them, and then I feel like I'm getting paid for something coming out on the other the other end, too!” he laughed. “And I feel like that's going to help my operation.”

Stay tuned for the next post to learn more about the impact that compost has had on Scott’s fall oat forage crop.

What agricultural waste products do you have access to close to your operation? For questions on how waste can be transformed into a profitable business, ask below!