Brent Webb likens life on a dairy farm to an “endless cycle:” He raises crops to feed his cows, which produce milk, his farm's primary product, as well as manure, which he applies to his fields annually to help nourish the next generation of crops.

Over time, Brent began to observe that his manure applications were having negative effects on the health of his soil and crops. When he saw infrared images of his fields which showed his crops suffering from soil compaction and nutritional deficiencies, he knew something had to change. “We thought, 'Gee, well, we're really missing the boat,'” Webb recalled. “We're putting all this manure on the ground and we're getting not as good of crops as those people who aren't.'” This discovery drove Webb to search for alternatives. Meanwhile, his cousin Mark, faced a similar problem.

Mark Webb, who operates a 1,800 cow dairy has even more dairy waste to process every year than Brent. And, like Brent, he had noticed that applying fresh manure to his fields caused problems with crop health, and with his soil. To try and combat this problem Mark began hauling his spent bedding and manure to the edges of his fields to let it sit for a few months to “compost naturally” before he spread it. This technique yielded better results than applying raw manure but it was still not satisfactory, both because he did not see the improvement in crop health, and because this strategy meant a lot of time and fuel was spent on moving manure.

Three years ago Mark purchased a locally produced compost turner. It didn't take long before he was unsatisfied with the machine's poor performance. It couldn't process all of his manure in one year. Luckily Brent had discovered the Aeromaster compost turner, which provided the answer to the Webbs' composting needs. 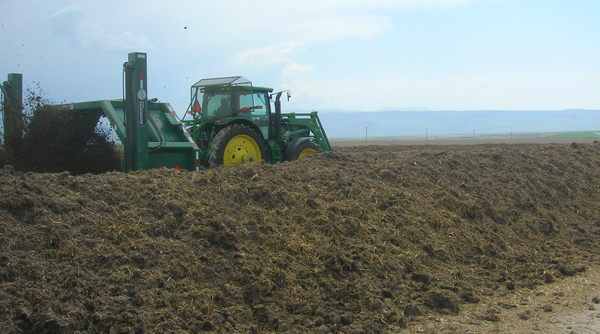 Using modern knowledge of composting, soil chemistry, and microbiology, Midwest Bio System's Advanced Composting System, which uses the Aeromaster series of compost turners, allows composting to take place much faster than if it was left solely to nature. The controlled process creates a higher quality product that retains more nutrients and is free of “bad” bacteria.

Within three months, Brent created a high-quality compost that was ready to apply to his fields. Mark bought an Aeromaster turner of his own, and two months, and eight turns later, Mark had processed all of his dairy waste into a high-quality compost, something he had not been able to do with the old turner. Both Webbs are extremely pleased with the quality of the compost they are producing using their Aeromasters, and Brent is already thinking of ways to take his high quality compost to the next level.

While Mark is currently focused on dealing with his manure problem, Brent is continuing his quest to create “the perfect compost,” a high quality soil amendment that will allow him to re-build the life in his soils and to one day stop using chemical fertilizers altogether.

Beyond creating high quality compost through the turning process, Brent is interested in adding nutrients and other microbial brews to his compost to get a stronger fertilizer effect. “There are certain things you can put in that compost pile to enhance it even more,” he explained.

Another step that will allow Brent to take his compost to the next level, will be to create humus compost. Humus is long carbon chains of stabilized organic matter. It is created by using compost and certain microbial inoculants, and it can be found naturally in the world's healthiest soils. Brent remembered that when he attended a local Midwest Bio Systems workshop he learned of an Illonis farmer who used humus compost to completely eliminate his need for phosphorus and potassium fertilizers by applying only one-half ton of humus compost per acre every year.

To get a biological boost faster, Brent is applying all the compost he can produce onto his cropland. Brent produced 11,000 tons of compost this year allowing him to spread the ideal application rate of five to six tons per acre. This allowed him to cover about half of his 4,000 acres, and he's on-track to cover the rest of his cropland next year.

Other farmers using the ACS composting system are encouraged to combine humus compost applications with “extracted compost tea” to gain maximum results. This approach of applying compost tea and solid compost together, brings results much faster than one or the other used alone.

Where Brent and Mark once “hauled” manure, simply to “get rid of it,” now they think in terms of spreading compost to supplement their fertilizer needs. Has either farm seen higher yields or healthier crops as a result of applying compost in only one year? Brent mentioned that he had a record alfalfa harvest this year. But is his compost responsible for this record yield? He said he likes to thinks so, but it's too soon to tell. Mark agrees, and adds that one big benefit he has already seen from his compost applications, is that compost, being more uniform than manure, makes a much smoother seed bed which gives him very uniform seed germination.

In the next post we'll explore how compost is helping Mark's field crops get off to a great start.

What other materials could the Webbs add to their compost to enhance its fertilizer value? Could a farmer interested in starting a business selling compost do so by composting the waste on his neighbors' dairies?